Audio bitrate is usually the basic way to determine the sound quality of an audio file. However, this is not always the case. There are more things to consider such as the audio format (compressed or uncompressed) sample rate and bit depth.

There are four essential factors that determine the audio quality:

It is essential to understand the meaning of the above, before you start recording, producing, DJing, or distributing music. 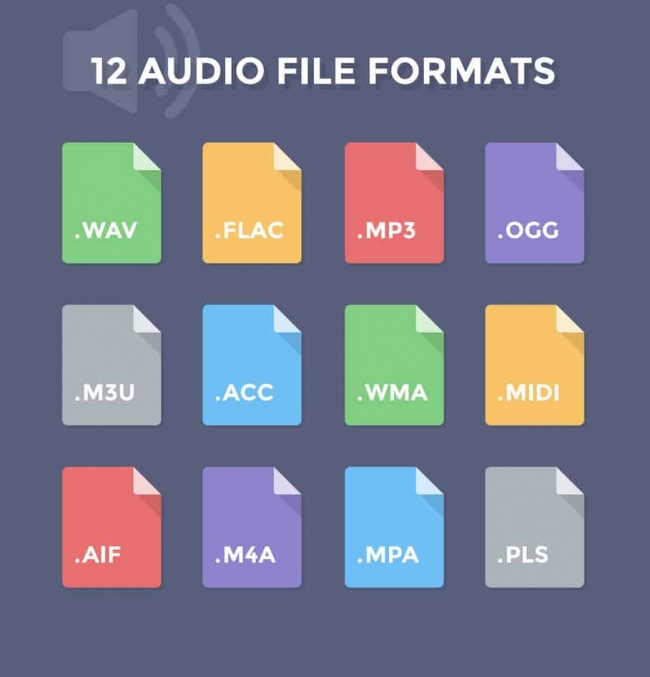 Sound is made out of vibrations and audio files capture those waves. There are three different types of audio files (Uncompressed, Lossless, Compressed).

There are more but less popular audio formats such as Ogg Vorbis and DSD (Direct Stream Digital). 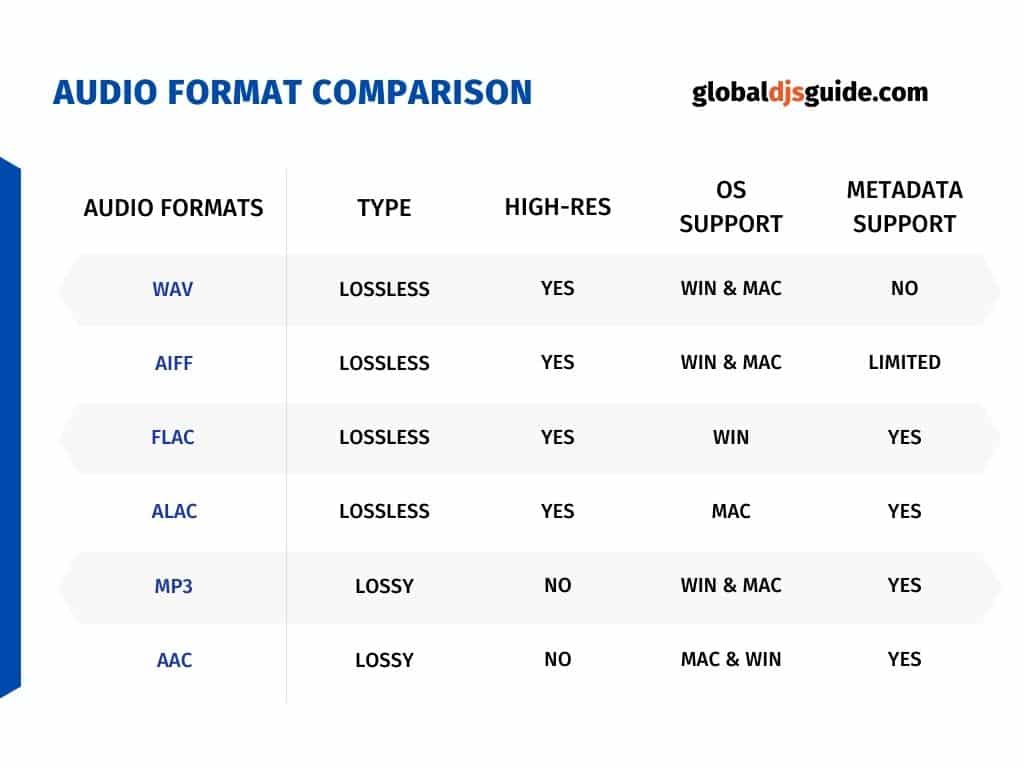 What is the best audio format?

There are so many audio formats for a reason. Musicians, record labels, DJs, and online distributors, all have different needs. There isn’t one audio format to consider as the best. You must choose the one that fills your expectations on fidelity, metadata support, and space storage. What you should really be asking is “what is the right audio format for me?”.

What is the right audio format?

For choosing the right audio format, you will have to consider three factors. Sound Quality, Metadata Support, and File Size. If you cannot sacrifice high fidelity, lossless files are for you. If you are planning to save thousands of songs, then compressed files are unavoidable.

The WAV is definitely a more recognizable format than Apple’s alternative. Both audio formats read PCM data and you cannot tell them apart somehow. With AIFF format however you have more options to store information about your audio file.

The main difference between FLAC and ALAC is that the first one is for Windows users and the second for iOS devices. ALAC is also able to reproduce a maximum sample rate up to 384kHz, while FLAC is up to 192 kHz.

If you want to get the best sound quality from your audio file, then FLAC is definitely the option to go. If on the other hand, you want to store a lot of files without a significant sound shortage then 320 kbps MP3 files are the best alternative.

What is the best audio format for DJs, producers, audiophiles, and distributors? 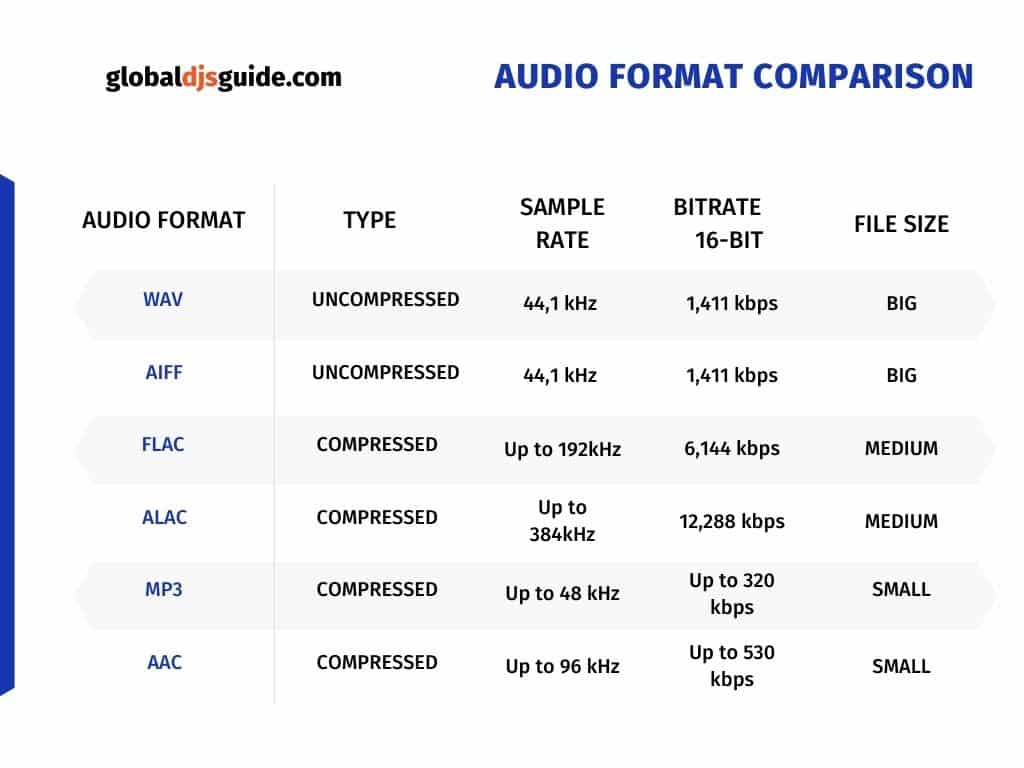 If you have some experience in music you have probably heard of sample rate and bit depth. You have definitely seen it on many recording and audio devices, such as audio interfaces and studio microphones, but maybe you don’t know exactly what they mean.

Knowing the sample rate and bit depth we can figure out the bitrate of your audio. More below.

Even tho the human ear can hear a frequency range at about 20kHz, it is essential to record music at more than double. The most common sample rates are 44.1kHz, 48kHz, 96kHz, and 192kHz. Less common audio sampling frequencies are 88.2kHz and 176.4kHz. 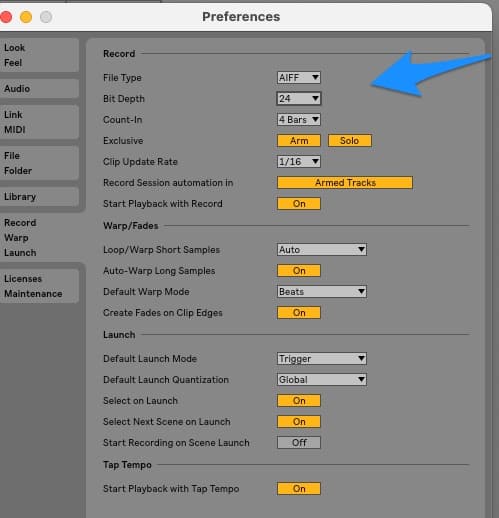 Since most audio hardware and software equipment support 24-bit or/and 32-bit float recording, it won’t warm using it. The additional 8 bit will ensure high-fidelity sound that professional musicians and audiophiles love to use. You will sacrifice a few MegaBytes more storage but it’s worth the result.

How important are the sample rate and bit depth? 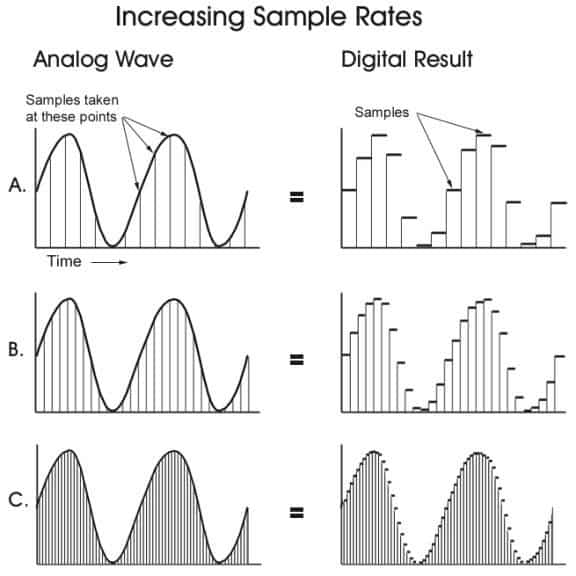 Higher sample rate and bit depth will surely provide a better environment for sound engineers to work with. However, it will also increase the total size of your file significantly.

You can see by the table below that if you are planning to record at 192kHz and 32-bit float you will need a powerful PC and a lot of storage. Three songs lasting 4 minutes each will take up to 1GB of your computer’s memory. While the same files with a 48kHz sample rate and 16-bit depth will take nearly 10 times less storage space. 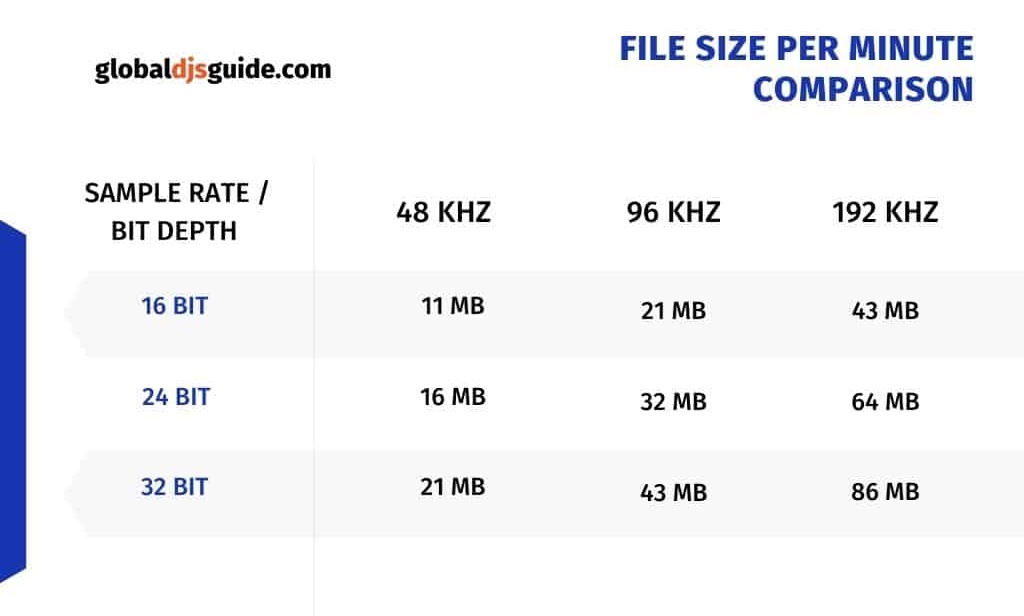 What is high-resolution audio?

A lossless file that is capable to reproduce the full range of sounds from the recording is considered high-resolution audio. In other words, anything better than CD quality (44,1 kHz sample rate and 16-bit bit depth).  The 192kHz / 32bit resolution is considered high-fidelity and so is the 48kHz / 24bit. Only lossless files (FLAC ALAC, WMA, WAV, and AIFF) can manage high-res audio.

The most popular online music stores such as Google Play, Apple Music, Spotify, and Beatport offer their music at 128, 256, or 360 kbps. If you are an audiophile then it’s only logical to look for high-resolution audio to listen to or stream music.

HD Tracks, 7Digital, and Tidal Masters are high-resolution music platforms that provide lossless audio files such as FLAC, ALAC, WAV, and AIFF. You can also choose the sample rate and bit depth, which in most cases can go up to 192kHz / 24-bit.

What is Audio Bitrate?

Bitrate is the term we use to describe the amount of data that is stored in an audio file. A higher audio bitrate means more data is being stored and therefore better audio quality.

For example, a 320 Kbps bitrate means that there are 320 kilobits transmitted for every second of audio. An 128 Kbps file stores 128 kilobits per second, therefore less data, size, and sound quality.

What is the best audio bitrate?

Only professional audio equipment and sound systems can handle a wide frequency response that can accommodate 1,1411 Kbps (CD bitrate) or more. If users are listening to your music on low-quality speakers or headphones, they won’t be getting the high resolution audio you have been distributing. That’s why you need to use good studio quality headphones and listen to your music properly.

How to calculate the audio bitrate?

What is the best audio bitrate for DJs, producers, and audiophiles? 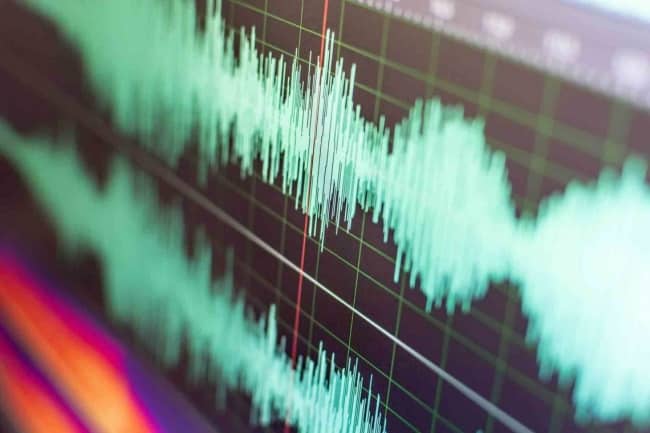 is a website for DJs and music producers. We research, compare, test, and review the latest DJ and home recording studio equipment. Our goal is to offer helpful and comprehensive guides for all music matters.

GlobalDJsGuide is a participant in the Amazon Services LLC Associates Program, an affiliate advertising program designed to provide means for sites to earn advertising fees by advertising and linking to Amazon.com